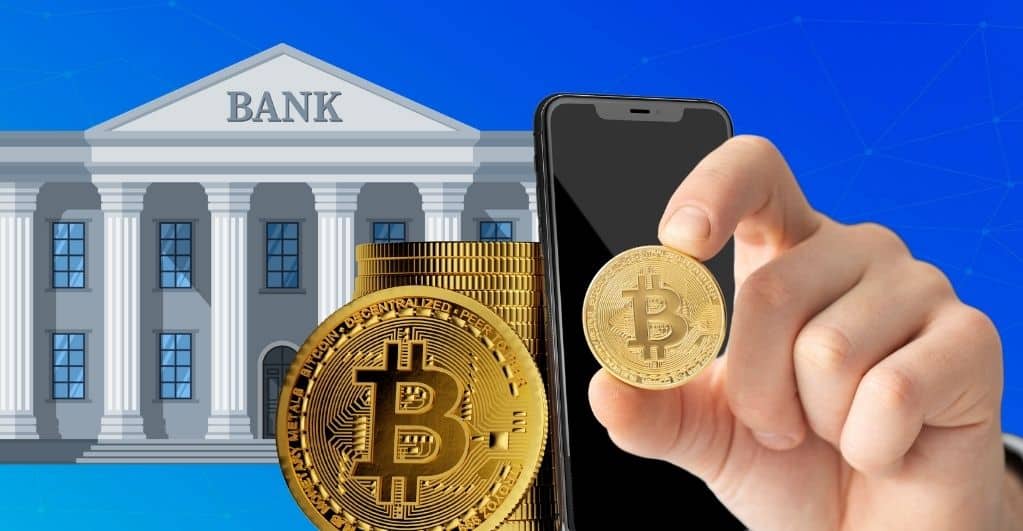 Bitcoin is a far cry from the traditional banking model. Bitcoin offers an efficient means of transferring money over the internet and is controlled by a decentralized network with a transparent set of rules, thus presenting an alternative to central bank-controlled fiat money. Bitcoin is an encrypted digital currency that uses peer-to-peer technology to operate with no central authority or banks. By its very definition, Bitcoin seems well-positioned to challenge traditional banks. Could it? Would it? Should it? Like just about everything else involving finance, the topic of central banks and their potential replacements are complex, with valid arguments for and against.

One of Bitcoin’s most prominent features is that it is decentralized, contrary to traditional currencies, which are controlled by a centralized government and consequently regulated by a third party.

Digital currencies are created and transacted in open-source environments, where they are controlled by code and rely on peer-to-peer networks. No single entity can affect the currency.

Digital currencies are created and transacted in open-source environments, where they are controlled by code and rely on peer-to-peer networks. No single entity can affect the currency.

Blockchain is easily the most revolutionary money change on the horizon and may make a huge difference across the fintech sector.

Fiat currency has been the legal means of trade in every part of the world for years, and different nations have their own. Bitcoin is a universal currency and is not regulated by any jurisdictions or authorities. However, both mediums need a repository – the bank for fiat currency and the blockchain network for Bitcoin. Governments issue fiat currencies, which are in return regulated by the central bank. Fiat money is deemed legal tender in that it is often the official means of finalizing transactions. Governments control the fiat money supply and issue policies from time to time that affects their value.

Cryptocurrencies, on the other hand, are merely digital assets that act as a medium of exchange that governments have no control over. The decentralization aspect means no central body can control or influence their value.

Because of its store of value, no transaction limits, and several other benefits, Bitcoin has disrupted the established monetary system. In essence, its growing popularity is posing a real challenge to the global banking system in many aspects. Keep reading to know more about how Bitcoin is proving to be better than traditional banks.

Bitcoin is a digital currency that operates over a decentralized peer-to-peer transaction network. Besides facilitating the online transaction, the network allows storage, buying, and selling of Bitcoin instantly anywhere in the world for a nominal fee. Anyone can trade Bitcoin as long as they are connected to the Internet while remaining anonymous. To send or receive Bitcoin, a user needs a digital wallet, an active public address (Bitcoin address), and a private key (password). The network hosts nodes that confirm every Bitcoin transaction and record them in a public ledger known as the blockchain.

A banking system is a network of financial institutions where one can deposit and withdraw money. On either action, the bank pays or charges a fixed interest rate. Banks also provide different financial services, such as loans. To avail of these services, one must open an account with the concerning bank. For a transaction to be confirmed via the bank, one needs to go through an online or offline verification process.

Explain Why Bitcoin Is Better Than Traditional Banks?

As opposed to banks, Bitcoin can be directly transferred to the recipient’s digital wallet across the world from the push of a button.

The peer-to-peer network allows for faster transactions using Bitcoin, which is impossible with banks due to the comparatively lengthy verification process.

Contrary to banks, no personal information is exchanged in Bitcoin transactions, except the public address, thanks to the decentralized network and cryptographic keys.

The cost of Bitcoin transactions is almost zero regardless of the amount transferred, while banks charge a fee on certain transactions.

No intermediaries are involved in Bitcoin transactions, so one does not have to wait for having the approval for fund transfer as with the banks.

Anyone can store whatever amount of Bitcoin they want in their digital wallet, but banks have a mandatory minimum balance requirement to keep the account active.

Only those who own Bitcoin can decide what to do with it, which does away with any government or entity control of the funds, as seen in the banks.

Banks & Credit Companies Can Limit Your Access to Your Own Funds

The banks are governed by private entities or governments that control all of the bank assets. Besides this, the fractional reserve banking structure can restrict access to funds by everyone at the same time. Banks or credit card companies can set a limit on the amount of money to be transferred. All this is done in the name of managing funds and verifying transactions.

How Is Bitcoin Better Than Traditional Banks In 2021?

Cryptocurrencies are a vehicle with great prospects. They have the potential to outperform conventional banking products while offering greater efficiency, less bureaucracy, and more transparency. Bitcoin has seen tremendous growth in its demand in 2020-21, causing banks to revisit their strategy. Here are the top two Bitcoin trends from this year.

Is traditional banking under threat from cryptocurrency? Yes and no. Most big banks are now acknowledging that the technology behind cryptocurrencies should be treated as the next big thing, perhaps like the invention of the steam engine, that has the potential to transform the world of finance and beyond.

Cryptocurrencies have already been identified as an industry threat by major players like BNP Paribas. The French banking giant released a report on the technology behind cryptocurrency and how it had the potential to make traditional banks redundant.

Bitcoin users can handle most of their daily payment needs themselves, without the need for interaction with banks and avoiding the need to incur bank fees. In the same way, the value stored in PayPal accounts moves outside of the bank’s payment systems, depriving banks of valuable payments revenue.

Unexpected economic events have created a sense of anxiety among investors, and they are looking for alternatives to secure their funds. Decentralized digital currencies have the potential to revolutionize many aspects of the payments industry due to their transparency, mobility, and ease-of-use. One of the most significant areas is international remittance. Cross-border crypto transactions are significantly faster than conventional methods of transferring money abroad and require very little in the way of fees and charges. Events like The Great Recession and COVID-19 pandemic have impacted the stability of the banking system, leading to higher inflation and global unemployment. At such a time, Bitcoin has provided people with potential investment opportunities as safe-haven assets against traditional banks. You can invest in Bitcoin via platforms like Bitcoin Lifestyle to make good profit from it. This platform is one of the trusted bitcoin robots.Check out Bitcoin Lifestyle Review to know more about this amazing platform.

Previous studies have demonstrated that mass adoption of a new technology takes place when the majority use it as easily as they would use it normally. For example, from cash to PIN card, Pin card to contactless cards, contactless to mobile payment. An easy-to-use experience is a key to bringing adoption. The banking world has, for almost the last century, continued in pretty much the same way with little to no threat from alternatives. That is all changing. If traditional banks ignore new consumer behaviors and preferences regarding how they transact and transfer money, Bitcoin could very much pose a threat to them. There is little doubt that banking will start to incorporate blockchain. Blockchain is likely to be used in certain aspects or niche areas of the banking business. At the same time, digital currencies have downsides like perceived volatility and some uncertainty around whether regulators will need to step in. Despite its volatile nature and lack of regulation, Bitcoin is earning interest from every part of the world community, and this is something banks should be wary of. But, disruption doesn’t happen overnight, and much of blockchain technology has yet to be perfected or widely tested.

It remains to be seen to what degree banks embrace the technology. One thing is clear, however: blockchain will indeed transform the industry.